Well Shit, I Don't Know How Angelina Jolie Does It-- My Movie Debut!

A couple of Sundays ago, Warren and I were getting a nice slow start, pleasantly dividing up the NYT and settling in to read it at a leisurely pace. He, as ever, grabbed the Magazine first and, turning to the TOC, held it out and said, "Look!" There was an image of some knitter-- you know knit bombing is all the rage these days and some knitters are getting tons of international press. I faux-whined, "Waa! I never get attention like that for my knitting!"

Well maybe I should've said, "Waaa! I never win the lottery!" Because just hours after lamenting my lack of knitting fame, I got a call from my old friend Gerrie, whom I hadn't heard from in years. She explained that the Austin Film Society is doing a remake of Slacker-- 20 different directors are recreating updated versions of all the scenes from the original flick-- and would I be interested in taking on the role of an undercover security guard who drops her knitting in order to rough up a shoplifter?

Before I tell you about the shoot, let's take a moment to reminisce about Slacker, shall we? That movie came out the very same month I moved to Austin, September 1991. I saw it at the Dobie Theater (RIP) and to tell you the truth, being so extremely new to Austin, I didn't totally get it. It didn't take me long though to discover Les Amis (RIP) and other cool places that appeared in the movie. And over the twenty years since it was first released (TWENTY YEARS!) I have come to know lots of folks who appeared in the original. I also more than get the whole thing now-- shit, my life over the past two decades has been like a living, breathing, ongoing sequel to the movie. Not to say that I'm a slacker (but then, not to say there's anything wrong with being a slacker). But Linklater surely captured the essence of this town, its meandering conversations and PhD-enhanced baristas (even before we called them baristas, come to think of it).


I remember once, years ago, my friend Thomas was visiting from St. Louis. (Hi, Thomas!) We were driving along Red River when I spotted my friend, Atietie, a philosophy professor originally from Nigeria. I asked Atietie-- who once eloquently explained to me that his greatest hope in life is to inspire a feeling in people like they get when the spot an exotic flower growing wild by the road-- if he wanted a lift. He hopped in and dropped right into our conversation. After we dropped him off, Thomas aptly noted, "Wow, that was right out of Slacker."

Since then I've had endless Slacker-hued moments in this town. Two particular days that come to mind are the one last summer when some dude brought his pet boa constrictor for a swim in Barton Creek, and another one around Christmas when I picked up a hitchhiking Leslie who wanted a ride for, like, three blocks.

Getting back to the remake. Director Elisabeth Sikes was tapped to recreate a scene that had been shot at FoodLand, which is now the Alamo South. It's a two-minute blip, but it's MY blip, dang it, and you better believe I'm going to wear something naughty-sexy to the premiere at the Paramount. In the original, a male undercover security guard drags himself away from playing a video game to accost a female shoplifter. In the new version, I'm the undercover guard, knitting in front of a video game which is -- nice touch-- covered in one of the tree cozies that was part of the big Blanton Museum Tree Cozy Extravaganza, organized by Knita Please (one of those internationally famous knitters I mentioned earlier). I was actually part of a team of three who knitted this cozy.

Fortunately, I only have a few lines and I was allowed to play around with them since-- really how does Angelina Jolie memorize so many lines AND while wearing a catsuit?-- to say I am a wooden actress is more than a kind assessment. Back in high school, my cousins Brian and Joe would cajole me into playing the female leads (Karen Kamikaze, Mrs. Attila the Hun) in Super 8 flicks they made. I still remember stumbling over a line with Cesar Romero's name in it and Brian and Joe being forced to make do since there just weren't that many teenage girls clamoring to take my place. We did have a rehearsal the other night, which was good. To my surprise, the first time I went to grab the shoplifter my head was convinced I really was a guard and he really was a criminal. I got into it. (David, who plays the shoplifter, was very nice about this-- me grabbing him and yelling at him.) 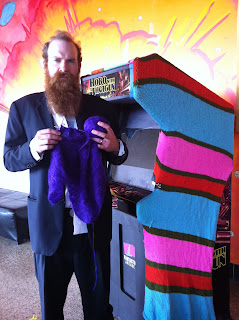 Also in our scene is Sam, an actor/director who heads up the aptly named Big Beard Films. Sam cuts a daunting figure-- he's about seventeen feet tall and has one of those beards that, on a lot of guys (but not Sam) I refer to as Unearned Ruggedness.

For the actual shoot, I showed up early this morning, indulged in a taco-laden feast provided by Craft Services (Craft Services! Talk about classy!) and then we began. I got super familiar with the sound guy, Andy, as he threaded the mic wire over my ample bosoms and around my back where he got to see that tattoo that not everybody gets to see. I got to flash my security badge over and over at David, the shoplifter, as we did take after take. Here's a picture of the security badge we did not wind up using, but which Gerrie made for me and let me keep-- I plan on wearing it everywhere for the rest of my life-- a new tool to embarrass my son! 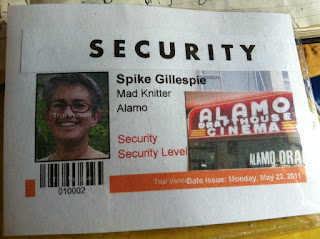 My scene cuts to one that includes Kathy McCarty, former front-woman for Glass Eye (RIP) and this provided even more excitement. In case you haven't heard Kathy's interpretation of Daniel Johnston's songs on her record Dead Dog's Eyeball, you should get a copy immediately. Not only is it one of the most gorgeous albums of all time, it also really defines a certain era in Austin. When I put it on, I flash back instantly to when Henry was little and things were simpler and nobody had cellphones and Austin's "skyline" was more defined by a couple dozen grackles sittin' in a tree than towering downtown condos.

It was all just so dang exciting. And getting asked to be in Slacker made me feel like I have arrived as an Austinite, that my invisible application to be considered a true citizen of this fine town has officially been accepted, that I really belong. Stay tuned for updates-- I hear the premiere will be in August.
Posted by Spike Gillespie at 3:38 PM 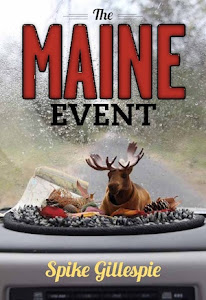